At 12.8 kilometres long, Line 1 of the Zaragoza Tram crosses the city from the southernmost point to the northernmost, going through the centre and the Old City, linking populous neighbourhoods like the Romareda and the Actur and young districts like Valdespartera and Parque Goya.

The Romareda football stadium and hospitals like Miguel Servet, Hospital Militar and the MAZ are connected for thousands of people who benefit from rapid, comfortable and environmentally sustainable access to points of interest like the Parque Grande, the Auditorium, the Plaza del Pilar, the Main Theatre and the Chamber of Commerce.

In addition, the Zaragoza Tram links together all the Zaragoza University campuses: that is Plaza San Francisco, the faculty of Economics and the Paraninfo and the Río Ebro campus, providing a service to thousands of students every day.

One of the great technological advances for Line 1 of the Tram is the dynamic traffic light priority system. Developed by technicians from the Zaragoza Council Mobility service, this allows the trams to run without the need to stop at junctions. This is possible thanks to balise technology that detects the passing tram. When this happens, traffic light phases are altered to allow the Tram to continue whenever possible.

This advance, which applies throughout Line 1 - even in the centre where the number of junctions is much greater - allows the user to gain in terms of speed and regularity, as it is possible to know the exact journey time whatever the state of the traffic.

A city for the people

The Zaragoza Tram has brought about a new urban concept which has revitalised the centre by eliminating vehicular traffic and promoting pedestrianised areas. The design comes from architect Iñaki Alday, in charge of projects such as the Water Park. A clear example of the conception of a new urban area dedicated to people is the pedestrian walkway that now runs from the Parque Grande (Emperador Carlos V Square) to Paseo de la Independencia, down the avenues Fernando el Católico and Gran Vía, and making it possible to cross the centre of Plaza Paraíso on foot. This long walkway gained by the residents runs a distance of 1.8 kilometres.

The Old City is now a meeting point for the people of Zaragoza and visitors to the city and is pedestrianised from Plaza de España via the Coso and down César Augusto.

Along the length of Line 1, in its focus on the environment, the Zaragoza Tram features a 'green carpet' of natural grass in various sections of the route - the extension of which is some 42,000 m2. This grass is of the Bermuda type, ideal for dry climates like that of Zaragoza, and it is irrigated using a drip system.

When undertaking the works, the Tram company renewed urban vegetation with 24 species. The Department of Parks and Gardens from the Council designated where to place the trees. Meanwhile, only the trees that impeded the circulation of the Tram were removed during the works programme. Indeed, there were special measures taken, such as the modification of the original route to maintain the hundred year old mulberry tree at the entrance to the Parque Grande. 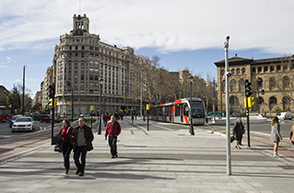 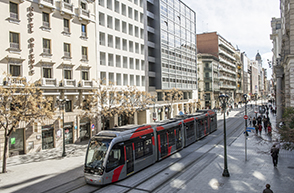 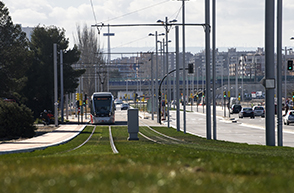 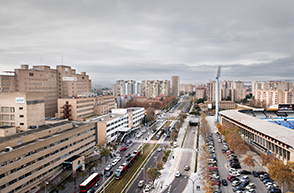 46 shelters along the route

46 shelters along the route. Line 1 has 42 single shelters and 4 double ones, with access to trams going in both directions.

The vending machines in the shelters include text in Braille and the screen has a special contrast mode for people who are partially sighted. The paving at the stop is tactile and colour contrast has been taken into account.

Each shelter has at least 3 security cameras connected to the Control Centre; these record all incidents. (The letters below should be highlighted on the image of the shelter).